For years I've heard friends talk about Watchmen and I never got around to reading it. I've always found the style of storytelling in graphic novels to be distracting. I'm a word guy, and superimposing images with words usually distracts me.

I finally sat down to read the graphic novel in its entirety this week, and I think it's fair to say that Watchmen reaches the full potential of the medium. It tells its story on multiple levels with sophisticated interaction between the evocative images and the (several?) brilliant storylines(s).

The movie trims out a few layers to focus on the central themes and images of the novel; an appropriate recognition of the limitations of the genre. Visually, the movie is stunning - it recreates the world of the Watchmen flawlessly, and it does so in ways that replicate the emotional impact of key moments in the novel. The acting feels a little weak and contrived in places (especially Matthew Goode, who clearly doesn't understand the subtlety of his character); but overall the characters are well-represented. The subtleties and moral ambiguities of the novel's plot are also generally well-implemented, and the overall experience of seeing it all take place on the big screen was awe-inspiring.

John Francis and I were actually struck silent for a few moments after it was over, something that is rare for both of us. Then we found ourselves talking for some time about the various moral and anthropological implications of the story.

Having read the novel, I was initially hesitant to take John Francis to the movie. Admittedly, the violence didn't exceed what he's seen on evening television or in James Bond/Jason Bourne movies. The sexuality barely went beyond that of a perfume ad. And the language is no worse than he's heard from his classmates. Still, it's our job to filter that sort of thing and to help him to process what he does encounter in a manner appropriate to his emotional maturity. (Of course, no one was monitoring our emotional maturity as kids when we found my grandfather's Playboy collection, but you tend to forget that sort of thing as you get older.)

Ultimately, I decided that he was old enough to understand the themes of the movie and appreciate its artistry. I really wanted him to see it on the big screen, and I wanted to watch it with him and interpret it with him. For me, discussing these sorts of powerful artistic experiences - engaging in deep discussions about the nature of good and evil - is the very best part of being a parent. I wanted to share this with him, and I thought he was ready for it.

- Which is more important, justice or peace?

- Should we have to choose between the two? Do we?

- Is humanity capable of real heroism?

- Are there some flaws that cannot be balanced by any level of heroism?

- Are there any heroes in the movie? Any villains?

- Is fear the only real motivation for peace?

- How do we determine the right thing to do?

- Why is it important to ask these kinds of questions? How does good art make us think in these ways?

In case you haven't already realized it, this is not a typical action movie, nor is the graphic novel what you might expect if you aren't familiar with the deep and morally complex themes dealt with in modern works of that genre. Don't go and see Watchmen if you're looking for a Superman movie. Also, I'd highly recommend reading the book first.

Even if you don't see the movie with your kids, I think these are important themes and I hope you'll find other ways to talk about them. Our children are exposed to more images of violence, sex, and profanity than we realize; and it's important that the feel comfortable looking to us to help them make sense of them. 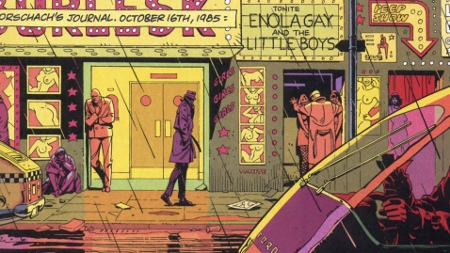